At this point in your program, we usually start to see some initial trends appearing. The focus in this phase should be on communication with the group as a whole.

How can I see how my Drivers are performing as a group?

As your Drivers onboard to Brightmile and the Manager Portal starts to populate with data, a natural question to ask is “how are my Drivers performing?”.

This is a simple question but the answer is not so simple as every company’s Drivers and starting point are different.

Furthermore, the overall purpose of Brightmile is to drive sustained improvement in Driver behaviour rather than focus on one point in time.

However, there are broadly three lenses through which to assess group-level Driver performance:

By Month 2 trends over time should start to emerge across the Five Pillars.

Go to the Trends section of the Home page to take a look.

E.g. For this group of Drivers, we can see an overall reduction in smartphone Distraction over the first 8 weeks of the Programme.

2) Performance against other groups

If groups have been set up for your company, it can be powerful to compare how your group of Drivers is performing against other groups or against the overall fleet.

E.g. for this group of Drivers (UK North), we can see that they have performed significantly better than the overall “Demo” fleet on the Risk Pillar in the first 3 weeks of their Programme.

See below for advice on how to set “targets” for your group of Drivers across the Five Pillars.

How might I set “targets” for my Drivers’ performance?

The ultimate goal of Brightmile is to reduce unsafe driving behaviour to zero across all of the Five Pillars.

However, this will take sustained efforts over time for most organisations so in the interim it is often helpful to have a “target” to work against in order to measure and reward progress.

There are two different ways in which you can set meaningful targets for your Drivers:

You may look to various “external sources” to help you set your targets:

An alternative is to set targets by using the Five Pillar Distribution to understand what short term targets are achievable for your Drivers. 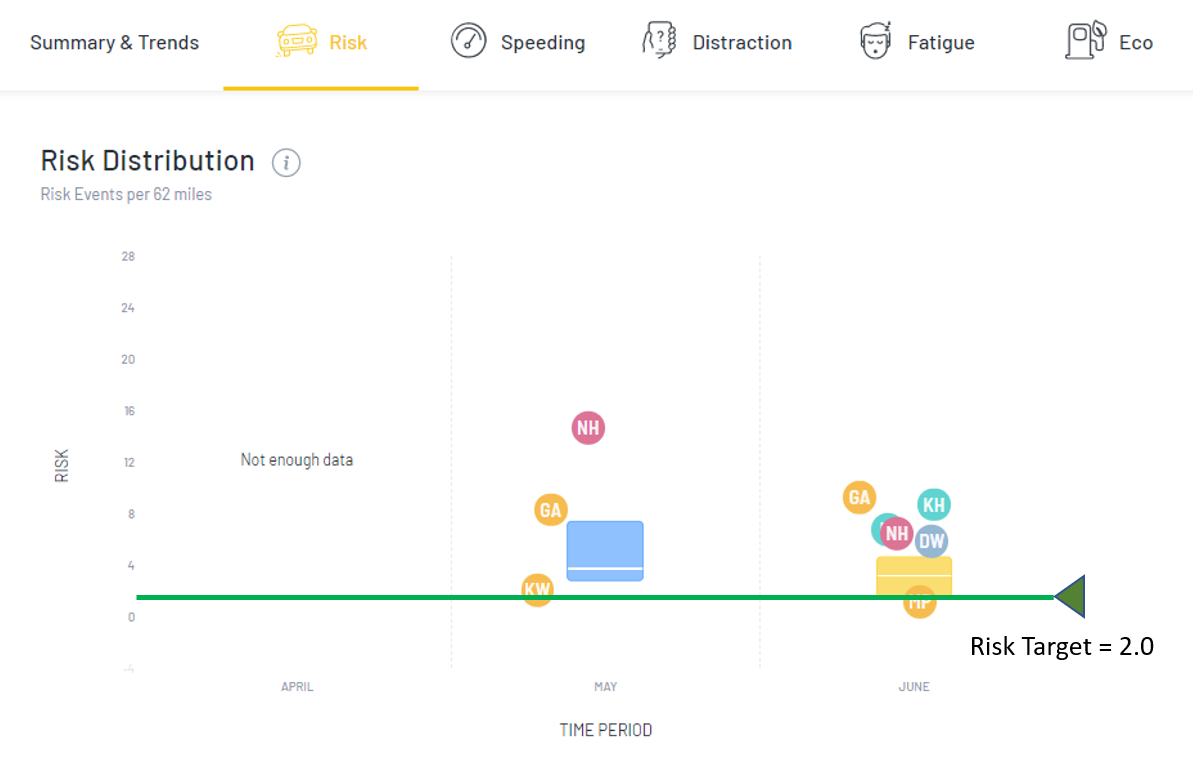 The example above of a group of Drivers in their first 2 months is a good example of how to understand performance and target improvement.

See managing your best and worst drivers for more detail on how to interpret this chart.

A Portal Manager might use the chart to set a preliminary “Risk target” based on the performance of the “best” 25% of Drivers.

Here, we see that in May, as the Drivers were onboarding and familiarising with the Driver App, the best 25% of Drivers averaged a Risk Score of 3.0 Risk Events per 62 miles.

In June, due to in-app coaching and self-improvement, we see that the best 25% of Drivers averaged a better Risk score of 2.0 Risk Events per 62 miles.

This Portal Manager could then use 2.0 as a “Risk target” for these Drivers moving forwards.

As Driver performance continues to improve, targets can then be revised down over time, until eventually the ultimate goal of zero negative behaviour is achieved.

Setting targets in this way can be powerful to drive behavioural change as it is hard for Drivers to argue that it isn’t realistic or achievable (as the same performance has been achieved by their peers), and it introduces the first element of internal competition, a powerful motivating force.

By performing this analysis, Portal Managers will also start to identify Good and Bad Outliers. The focus should be on persistent behaviour so for now, we recommend that, unless you identify extremely risky behaviours, you monitor for improvement in Month 2 and then take appropriate intervention steps from Month 3 onwards.